The World Advanced Vehicle Expedition (WAVE) Rally was launched in 2011 with the objective of starting to change road transport to electric vehicles powered by energy from the sun, wind and wave.
The WAVE Trophy electric car rally is not only the world largest EV rally, but is also an excellent testing ground for all types of electric road vehicles, with advanced batteries, motors and controllers evaluated in tough real life conditions.

Green MotorSport was the first team to represent Great Britain in WAVE back in 2011 and has been representing Great Britain for over 5 years in the WAVE trophy.

The WAVE rally is one of the main proving grounds for all our automotive electric drive technologies.

Each year the number of electric cars, vans and bikes participating has increased with the Guinness Book of Records confirming that a world record number of 481 battery powered vehicles took part in WAVE 2014. 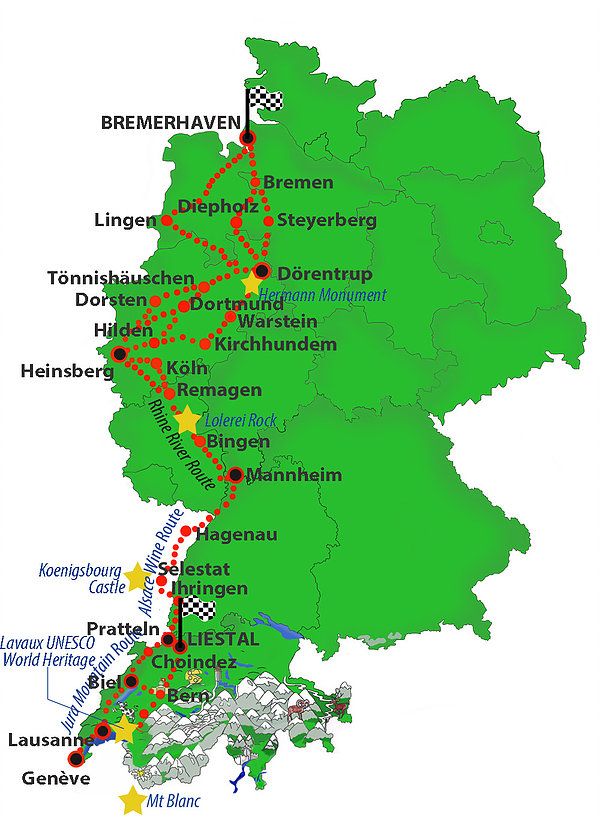 The 6th WAVE will take place in June 2016, with a route starting in Bremerhaven and visiting Switzerland, with a climb through the high Alps.  Routemaster will be tracking our every move on the rally using a state of the art real time tracking system installed in the car.

Gordon Foat and Sebastian Barrett James of Green MotorSport ( team 3 ) group 1  will be driving the E6 BYD electric car. The car has a range of over 180 miles on a single charge.  Scroll down to see a live map of the current speed and location of the team car WAVE 74346VI or download the software to take a more detailed look.     Don’t forget to track our progress to the UN offices on the 17th June 2016  between 10am and 5pm

The WAVE organisers assist by installing the latest recharging equipment en route, which will enable fast charging. Each WAVE adds to the number of European recharging points which are powered by energy from the sun and wind, so that drivers of zero emission vehicles will in due course be able to travel freely around Europe.

In general each WAVE rally consists of visiting governments, business leaders, schools and places of interest. Events include live TV and radio interviews, press announcements, video displays and competitions. The public are also invited to test drive electric vehicles and see how they are recharged by renewable energy. For more information on WAVE see, http://www.wavetrophy.com

This year Green MotorSport, Team GB will be taking letters from over 300 schoolchildren in the UK  to the UN in Geneva, asking them to take stronger action against climate change. Thousands of letters from children around the world will be used to create the world’s largest greeting card in Geneva. More details can be found at http://www.wave.earth

For more information on the Green MotorSport WAVE team  ( Group 1 team number 3 ) and other WAVE teams from all over the world see http://www.wave.earth/#!participants/c5zuw

If your company would like to join or support our dedicated WAVE team in 2017 we have various opportunities to suit nearly every budget from technology partners to Corporate sponsorship packages. Contact www.greenmotorsport.com for more information.